Buy both Star Trek Framed Movies Sheet and Star Trek Movies Medal and get 10% off. 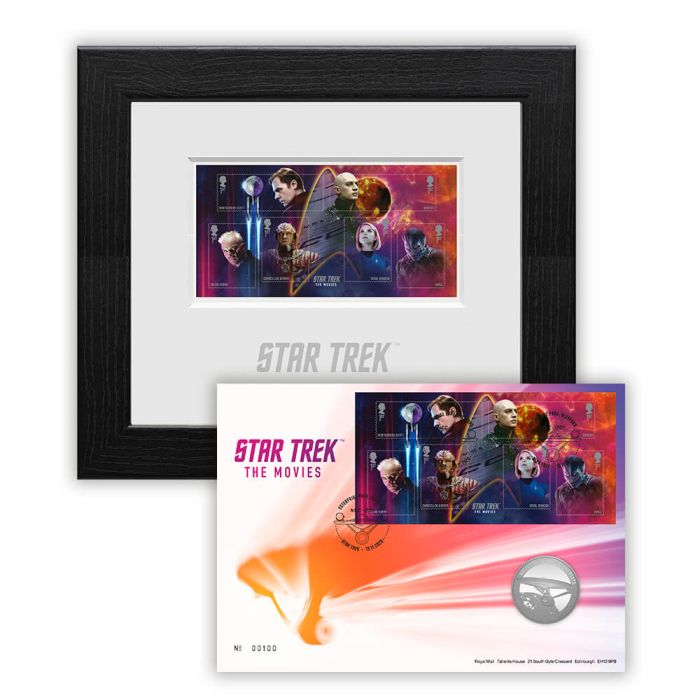 Treat the Star Trek collector in your life to this celebratory movie bundle.

The Framed Movies Sheet celebrates the contribution British acting talent has made to the success of the blockbuster film franchise.

Handmade in the UK for Royal Mail, the Movies Sheet features popular British actors in iconic roles, framed and mounted in a black ash-effect frame above the official Star Trek logo.

The cupro-nickel medal, struck by The Royal Mint, includes an image of the Enterprise NCC-1701-A on the front, with the reverse featuring the iconic phrase that accompanies the Vulcan Salute: ‘Live long and prosper’.

Each souvenir contains the Miniature Sheet’s six stamps marking the contribution of British talent to the success of the big screen blockbusters.

The stamps are cancelled with an exclusive Enterprise Park, Sleaford postmark in honour of the iconic starship.

The envelope cover design is inspired by the film series’ USS Enterprise with the reverse displaying the logos from all 13 films from 1979’s Star Trek: The Motion Picture to 2016’s Star Trek Beyond.