Each limited edition collectible is one of only 15,000 for sale worldwide and contains a complete set of Star Trek Special Stamps and a specially struck Medal. 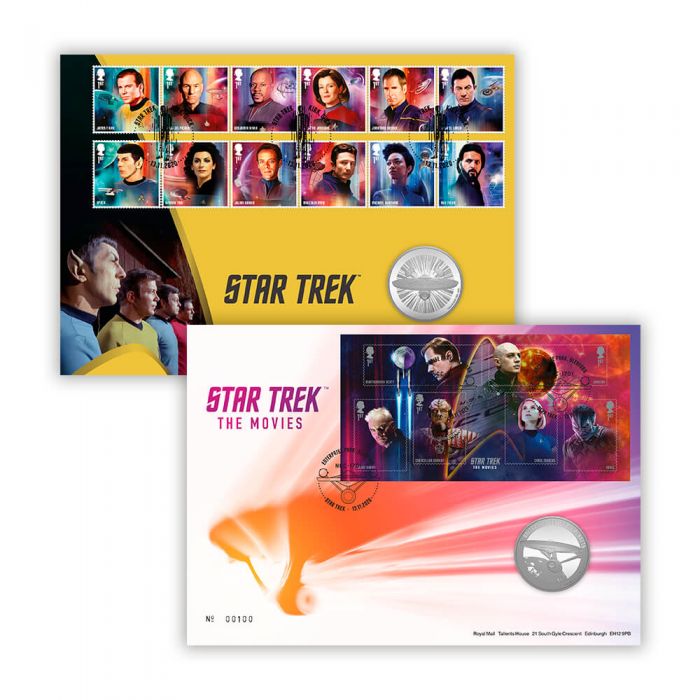 The cupro-nickel medal, struck by The Royal Mint, includes an image of the original USS Enterprise on the front; the reverse depicts the Starfleet delta insignia worn on crew uniforms in the first series. The stamps are cancelled with a special Kirk, Wick postmark – a playful reference to the captain from the 1960s show.

The envelope’s cover design honours the series’ design theme; the reverse features a photograph of James T Kirk and Spock alongside the Starfleet delta and the iconic first line from the series’ title sequence monologue – ‘Space: the final frontier’.

The souvenir medal includes an image of the Enterprise NCC-1701-A on the front. The reverse features the iconic phrase that accompanies the Vulcan Salute: ‘Live long and prosper’. The stamps are cancelled with an exclusive Enterprise Park, Sleaford postmark in honour of the iconic starship.

The envelope cover design is inspired by the film series’ USS Enterprise; the reverse displays the logos from all 13 films – from 1979’s Star Trek: The Motion Picture, to 2016’s Star Trek Beyond.

A colourful insert includes insights and images from each of the 13 Star Trek films.