Catalogue code
ZP004
19th September 2013
Mackennal triumphed with his design for the higher value four-stamp Seahorses series. The four Seahorses - with half-crown, five shillings, ten shillings and £1 values - finally appeared in July 1913. They were instantly loved, as they are today.
Code ZP004
Save item for later
Skip to the end of the images gallery 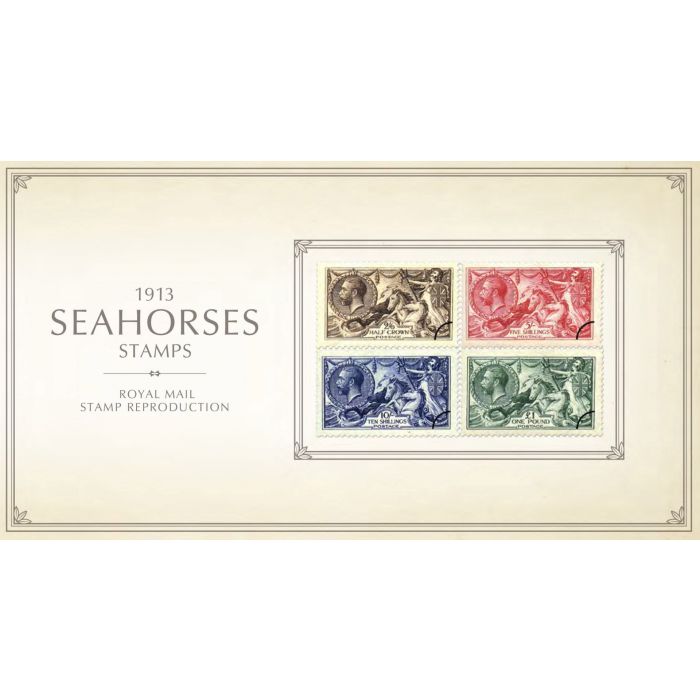 Mackennal triumphed with his design for the higher value four-stamp Seahorses series. He was endorsed by The King, who asked that he design the stamps. George took a personal interest in the Seahorses, suggesting changes. One can understand the interest. Mackennal's design, with a militant Britannia driving horses across the ocean, captured the imperial strength of the nation he ruled in an era where the major powers were jockeying for position in Europe and around the world. Naval power was key, and the image of Britannia with shield and trident dominating the sea speaks volumes.

Of its time it might have been, but Mackennal's design reflects his interest in Greek and Roman coins. Syracusan currency from the 5th century BC, for example, showed a two-wheeled chariot - a look that informed his design for the 1908 London Olympics commemorative medal, where Phoebus Apollo rides a chariot drawn by four rearing horses.

This combination of modern imperial posturing and classical tradition hit the mark, but George did ask for changes: to replace the value on Britannia's shield with the Union Flag; the value to move to the tablet where the 'Postage & Revenue' line was; and to show the horses in harness. With the artwork revised, the designs were approved and the stamps engraved by JAC Harrison. The four Seahorses - with half-crown, five shillings, ten shillings and £1 values - finally appeared in July 1913. They were instantly loved, as they are today.